She Wouldn’t Change a Thing

I’m going to have to take a moment to collect my thoughts after finishing She Wouldn’t Change a Thing. What a rollercoaster of a story and emotional ending! A mix between Inception and The Midnight Library, Sarah Adlakha tackles life, choice, love, and eternity in her dazzling debut novel.

Would you change the past if you were given a chance, even if it meant giving up your future?

Maria Forssmann is a well-known psychologist who loves what she does. Despite being days away from giving birth to her son, nothing can stop Maria from going to work; however, on a day that should’ve been as normal as any, a woman walks into her life knowing things about Maria that she hasn’t told anyone – not even her husband. In a plea to save her life, the stranger tries to warn Maria of the danger that’s awaiting her around the corner; but, disbelieving the clearly deranged woman, Maria does her best to shrug the haunting words out of her mind, that is, until she wakes up twenty-two years in the past in her seventeen-year-old body!

Will Maria find her way back to her family and meet her unborn child, or will the purpose that brought her back in time pull her further into the world she’s found herself in? 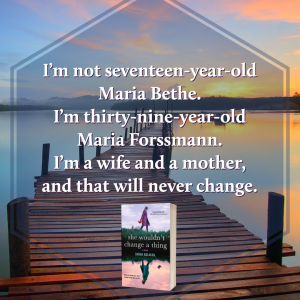 “I’m not seventeen-year-old Maria Bethe. I’m thirty-nine-year-old Maria Forssmann. I’m a wife and a mother, and that will never change.” ~ Sarah Adlakha 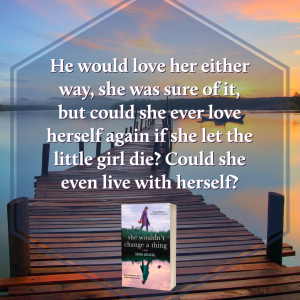 “He would love her either way, she was sure of it, but could she ever love herself again if she let the little girl die? Could she even live with herself?” ~ Sarah Adlakha

She Wouldn’t Change a Thing is one of those novels that stays on your mind long after you’ve read the last page. Having recently read The Midnight Library, I was struck by the stark similarities between the two books. However, where spirituality lacked in Matt Haig’s narrative, it prospered in Sarah Adlakha’s world (though I wouldn’t go so far as to call this a Christian story). 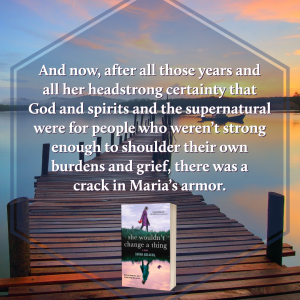 “And now, after all those years and all her headstrong certainty that God and spirits and the supernatural were for people who weren’t strong enough to shoulder their own burdens and grief, there was a crack in Maria’s armor.” ~ Sarah Adlakha

I thoroughly enjoyed reading She Wouldn’t Change a Thing! Not expecting such a mysterious and suspenseful plot, my attention held throughout, and I found myself unable to put down my Kindle – especially the last quarter. I also liked that this was a clean read that shared the important and everlasting effect of love and sacrifice without explicit detail. If this is Sarah Adlakha’s first novel, I can only imagine how great her upcoming releases are going to be!

*Thank you to NetGalley and the publisher for providing me with a pre-release copy of this book. My thoughts and opinions are entirely my own!*