“She studied him with hostility he’d certainly not earned. He was the one who’d been shot, by saints. It was high time he regain the upper hand even if his own were still bound.” ~ Misty M. Beller

A refreshing story of exploration, love, and sacrifice. A Warrior’s Heart takes readers on an adventure into the Canadian mountains, where the remote community of Laurent dwells in peace and solitude. However, when a foreigner stumbles upon their territory, Laurent’s quiet life might change forever. Will the people be able to trust this stranger despite the threat he poses of exposing their location to the rest of the world?

Evan MacManus is a spy for the United States, commissioned by James Madison himself to find pitchblende, a mineral that could end the War of 1812. After months of trekking through the Canadian wilderness to find what the army needs to win freedom from Great Britain, Evan will discover something far more valuable than he could’ve imagined, but what will happen when his heart is captured by the warrior who imprisoned him despite his innocence? Can Evan find a way to be set free and fulfill his mission without betraying his orders, or will the truth prove harder to share when the outcome could destroy the bond he’s formed with Brielle? 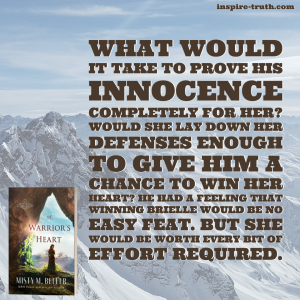 “What would it take to prove his innocence completely for her? Would she lay down her defenses enough to give him a chance to win her heart? He had a feeling that winning Brielle would be no easy feat. But she would be worth every bit of effort required.” ~ Misty M. Beller

Brielle Durand has lived within the caved walls of Laurent her entire life. Though her heart yearns to explore past their territory lines, Brielle remains loyal to her duty to protect the people of Laurent with her life; nevertheless, everything changes when she shoots Evan MacManus and takes him prisoner. Is he truly trustworthy, or is he the forerunner of another vicious attack on her people? Brielle will do what it takes to unveil Evan’s secrets, but as she gets to know him, she’ll learn that it’s okay not always being the strongest person in the room. 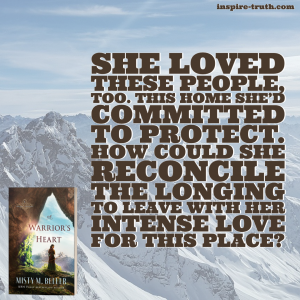 “She loved these people, too. This home she’d committed to protect. How could she reconcile the longing to leave with her intense love for this place?” ~ Misty M. Beller

A Warrior’s Heart is a unique novel that points the glory to God rather than a hero. How do we respond when our faith is put to the test, or we are told to take a back seat rather than joining the frontline? In Evan and Brielle’s case, they must discover what it means to trust in God and humble themselves despite their drive to do it on their own. God’s ways are mysterious, and it takes walking into the unexpected to understand all that He has planned.

I enjoyed this God-fearing book. Full of meaning, action, and faith, I was immediately absorbed into its storyline. With so many novels casting the glory on protagonists, I found Misty M. Beller’s approach pioneering to the Christian Fiction genre. Our strength is not enough, but with God on our side, we will be victorious! A Warrior’s Heart portrayed this and more in its intricate journey through trust, sacrifice, love, and prayer. Sometimes, we must be stripped of everything to gain the world!

*Thank you to NetGalley and the publisher for providing this pre-release copy. All thoughts and opinions are entirely my own!* 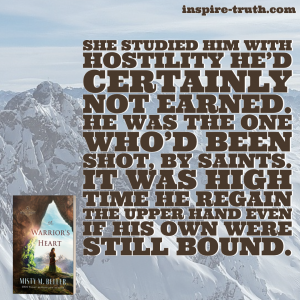 “She studied him with hostility he’d certainly not earned. He was the one who’d been shot, by saints. It was high time he regain the upper hand even if his own were still bound.” ~ Misty M. Beller 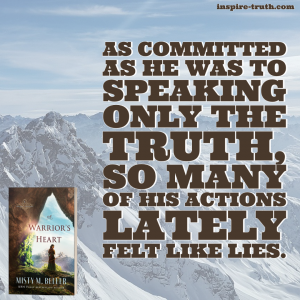 “As committed as he was to speaking only the truth, so many of his actions lately felt like lies.” ~ Misty M. Beller 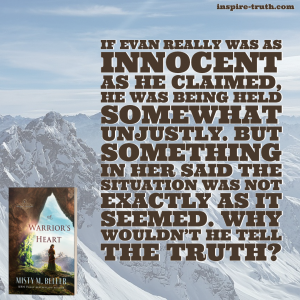 “If Evan really was as innocent as he claimed, he was being held somewhat unjustly. But something in her said the situation was not exactly as it seemed. Why wouldn’t he tell the truth?” ~ Misty M. Beller