A girl at a concert. An explosion. A man caught in the crossfire. An attorney ready to fight. Aftermath opens with a bang (literally) and is non-stop until the very end!

When a bomb explodes at the concert Taylor and her best friends are attending, her fight-or-flight kicks in, and she runs without looking back. Guilt-ridden and full of shock, Taylor’s already fragile mental state crumbles as she becomes obsessed with uncovering the truth of this horrific attack. She wants justice for her friends’ lives, but is the right man being accused of the crime? 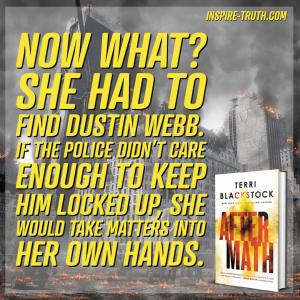 “Now what? She had to find Dustin Webb. If the police didn’t care enough to keep him locked up, she would take matters into her own hands.” ~ Terri Blackstock

Dustin Webb has nothing to hide, or so he thought. After getting pulled over, he is just as stunned as the police when they open his trunk and find boxes of explosives. How did they get in there? What is going to happen to him? Who can prove his innocence? Swallowing his pride, Dustin calls the only person he knows will be able to get him out of this mess, Jamie Powell, his childhood best friend and a criminal attorney willing to fight tooth and nail for what is right. 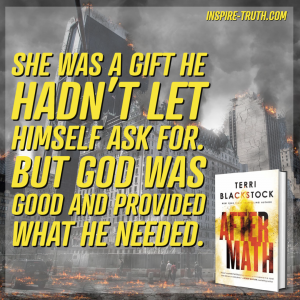 “She was a gift he hadn’t let himself ask for. But God was good and provided what he needed.” ~ Terri Blackstock

Surprised to hear from Dustin after years of radio silence, Jamie agrees to help him, believing him to be the man she once knew; but what if her conscience is leading her astray? Battling her own reservations, Jamie can’t help but remind herself that Dustin is more like a stranger after being apart for so long. Can she truly trust him, or was his aunt right about him all along? 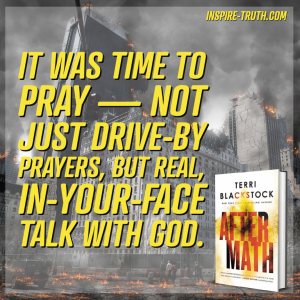 “It was time to pray — not just drive-by prayers, but real, in-your-face talk with God.” ~ Terri Blackstock

Aftermath was a thrilling book from start to finish! With action, mystery, suspense, and a Christian theme throughout, the story captivated my attention and jeered me to find out what would happen next. Full of twists and turns, this was my first and definitely not the last novel I read by Terri Blackstock! Gripping from the opening line, I was pleasantly surprised at the quality and excitement the plot exuded.

We all long to be seen as good people, so when our integrity is put to the test, we can often turn against God, asking Him “why?” when we should be asking “why not?”! Beyond our own understandings, God has a way of bringing us back to the very place He has called us to be; however, sometimes, it’s through the unlikeliest and most uncomfortable circumstances that we find His love and see His glory shines through!

If you enjoy a good thriller, Aftermath is the book for you!