Israeli weddings are very different from the ceremonies we’re used to witnessing in movies or typical Western settings. Attend one unprepared, and you’ll probably leave in shock. Go prepared, and you could wind up having a great time. However, be ready for extremely loud music and lots of food, booze, and dancing!

After recently attending an Israeli wedding, I felt the need to write a survival guide for those new to Israel or those invited to a wedding who aren’t sure what to expect. If you like to party, Israeli weddings will be your cup of tea; however, if you prefer a more tame night out, then this post could be the perfect warning before you accept an invitation!

Disclaimer: I am not an expert on Israeli weddings or Jewish ceremonies and do not pretend to be. These are my opinions and might not relate to EVERY Israeli wedding. The purpose of this post is to make people laugh while informing those looking to attend a wedding in Israel of the stark contrasts, so they aren’t shell-shocked the first time they attend such an event!

Tip #1 – This is NOT a night with the Queen, so dress nice but comfortably!

Upon obtaining a wedding invitation, one of the first thoughts that go through people’s minds (at least the women) is, “What am I going to wear?” Typically, a dress code will be included in the invitation; however, if there is no specificity, it can be hit or miss when it comes to attire.

While most weddings are known to be formal — suit and tie, Sunday best, dresses, etc. — Israeli weddings can be more casual (very, actually). You could turn up in jeans and a t-shirt, and no one would bat an eye! So, your goal should be to wear something elegant but also comfortable because it will be a LONGG night!

It’s up to you if you want to go all out (usually, those closest to the bride and groom will dress the smartest); nevertheless, don’t think of this as an evening with the Queen. Dress nice, but not in something that is stiff and prevents movement (there’s going to be dancing). 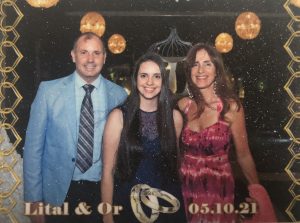 The second thing people usually think about when preparing to attend a wedding is buying a gift. While some couples will link a registry on their website so guests can see what they want and need, Israelis keep it simple… Just bring money. In fact, if you arrive with a gift, you’re sure to be holding it for a while as there are no gift tables at Israeli weddings!

With no prior knowledge of this custom before attending our first wedding in Israel, my parents and I innocently turned up with a fancy toaster all wrapped up. Finding nowhere to put it, we had to hold onto it until after the ceremony. We should’ve known something was wrong at this point, but it was the couple’s look of surprise when we gave them our present that was the icing on the cake. We’ll NEVER make this mistake again!

Bonus tip – Arrive at a wedding with cash or a check. Don’t worry about having a special card because there is an envelope station at the venue entrance, which guests are expected to use before dropping the gift into a large ballot box.

Tip #3 – Enjoy the pre-ceremony reception, but pace yourself!

There are two receptions at Israeli weddings — one at the beginning and one at the end. When you arrive at the event hall, the bride and groom’s family will welcome you at the entrance and invite you to enjoy the multiple food stations and open bar. This reception typically takes place outside, so if it’s a cool evening, make sure you take a jacket or shawl. The night has begun, so let the drinking and eating begin! There is a lot of food to choose from — from traditional Israeli dishes (shawarma, falafels, schnitzels) to sushi, meat, burgers, and more — so, you will not go hungry; however, though it is tempting, don’t overeat because there is MORE food to come!

While traditional weddings have a fixed schedule, Israeli weddings rarely start on time. As guests mingle, the bride and groom are preparing for the ceremony, which can happen anywhere between one to two hours after the start of the reception (which tends to begin at 6-7pm), so don’t feel like you have to arrive at the very beginning. Once again, this is going to be a long evening, so brace yourselves!

Tip #4 – There is no such thing as a formal ceremony; it’s time to celebrate!

We all know the tune to the Wedding March. As soon as the first note is played, guests will automatically stand and silently watch as the bride walks down the aisle holding the arm of her father or relative. While many enjoy this intimate part of the ceremony, there is something so uncomfortable and unnatural about standing in the pews as still as a statue while two people share one of the happiest moments of their lives!

It’s no secret that Israelis love to party. Finding any chance to celebrate, they will dance and shout until the sun comes up (literally)! So, why would a wedding be any different?

When the official ceremony begins, and the music starts to play just before the wedding party enters, rather than everyone finding a place to sit, guests create a line toward the chuppah — a canopy that symbolizes God’s presence and the home that is about to be established. Then, as the betrothed make their appearance — both escorted by their parents — everyone cheers and claps in excitement!

In my opinion, this is the best part of the entire wedding! There is something so special about everyone joining in the jubilation of a couple’s union!

Even more amazing is the tradition called Bedeken, where the groom puts the veil over his bride’s face. Stemmed from the story of Jacob after he was tricked into marrying Leah rather than Rachel, it’s has become a Jewish tradition for the groom to place the veil over his bride so he can see her face and make sure that he’s not being deceived before exchanging vows. Bedeken also signifies that the groom’s love for his bride is focused more on her inner beauty, so these moments can be extremely beautiful and intimate.

The first time I witnessed this custom, I could feel the couple’s electric love zapping through the air! Rather than the bride walking toward her groom as he waited at the altar (or, in this case, the chuppah), the bride was kissed by her parents and left at the top of the aisle to pray before her future husband approached. In a tender moment, the two locked eyes and shared a light kiss before the groom gently took the veil between his finger and draped it over his bride’s face, ready to lead her into their future. This was the quietest moment of the entire ceremony as guests watched in speechless awe! Then, just as quickly, the spell was broken and the crowd once again erupted in cheers as sparklers lit up the night and the couple took the remaining steps to the front.

Under the chuppah, traditional prayers are spoken and the bride and groom are led through a series of traditions — the bride circling the groom seven times, reciting their vows, exchanging rings, signing the ketubah (marriage license), and breaking the wine glass. If you are close to the front, you’ll be able to hear these things taking place; however, most guests begin talking until the customs are complete, so try to find a place near the front before the ceremony begins.

With a final cheer, the doors to the reception hall are opened, and guests are invited to congratulate the newlyweds under the chuppah before finding their assigned tables.

Tip #5 – Grab your earplugs and get ready to PaRtY!

While the bride and groom go to a secluded room to eat and have a moment alone after the ceremony, guests have the opportunity to meet those sitting at their table and order their first and second courses of food (I told you there would be more food – be sure to tip the waiter before you leave)! One of the keys to surviving an Israeli wedding (if you like to drink) is to eat in-between the dancing to keep your energies high as the night’s celebration is only just beginning!

If you want to save your hearing, this might be a good respite to put in earplugs because the DJ is about to crank up the volume and turn the hall into an epic nightclub (I’m not kidding! Watch the video below)!

It is always surprising to watch as the lights dim, and the songs vibrate through the hall while the elderly guests remain seated, waiting for their meal to come before making their quick escape. While the first reception is quiet and filled with conversation, the second reception is all about celebrating the only way Israelis know how — loud and rowdy!

As the newlyweds enter the hall, guests flock to the dance floor, circling the couple and dancing to the beat of the music. If you have ever seen a scene in a movie of a Jewish wedding, I’m sure you know the tradition of putting the bride and groom on chairs and raising them above the dance floor. Just as it sounds, it is a mad thing to watch, but it’s also a lot of fun! If you’re brave enough, you might even get a chance to sit on someone’s shoulder and party in the sky with the couple!

Contrary to traditional Western weddings, there are no speeches, no father-daughter dance (though the newlyweds share one slow dance), and no intimate meal at Israeli weddings. Nevertheless, that does not take away the heart and joy that can be found at these ceremonies! You also don’t have to worry about taking a date to an Israeli wedding because, similar to a Scottish Ceilidh, everyone dances together, leaving no one out. From holding hands and dancing in a large circle to jumping up and down with whoever is closest to you, everyone on the dance floor becomes interconnected and there is no shortage of smiles and laughter. Stay on the dance floor long enough, and you’re sure to be handed a shot which everyone shoots back in the middle of dancing around! (Beware of spilled drinks so you don’t slip)

The night is young, and there is no limit to how long you have to stay (some weddings can go until at least 3am). This is a night to remember, so eat, enjoy, meet new people, and dance like no one’s watching! And, on your way out, don’t forget to look for your picture on the magnet board to take home as a souvenir!

You are now ready to attend a wedding in Israel! Though they are the polar opposite of traditional Western weddings, Israeli weddings don’t lack character or life. Don’t feel like you have to stay for the entire night, but also don’t limit yourself if you’re having a good time! Make every moment count!