Adventures in Israel: The Facial Shocker

Getting a facial should be a revitalizing experience, right? The way influencers make it look, it seems like you’re supposed to come out feeling like you have a new face – bright, shiny, and fresh. At least, that’s what I believed, but, let me tell you, ordinary people do NOT leave looking shiny and new — or, at least, I didn’t!

Two days after my 21st birthday, I had my first facial appointment. Expecting to have my pours cleaned up so I’d look fresh during my month-long adventure in South Africa, the experience was FAR from what I signed up for.

Quick back-story: A couple of weeks earlier, my dad had gotten a facial from the same Russian lady and came home with his face shining and clean, with only a small amount of redness. Though he told me that it was really painful and not the best experience, the result made it seem worth it. So, with the result in mind, I was excited to book an appointment and look just as renewed as my dad did, no matter how painful the process was.

Cut to the day of the facial. It had been a crazy morning, and I was barely on time for my appointment. However, the lady was lovely and spoke a bit of English, so I instantly felt comfortable. All thoughts about how painful or scary this experience was going to be vanishing…until the torture began.

My expectation: VS. Reality:

Now, I have sensitive skin, so I knew a reaction could happen, but I never imagined my face would turn out the way it did. As the therapist began cleansing my skin, I thought, “This isn’t so bad. Maybe she’ll add a mask on my face to draw out the bad stuff before she starts squeezing. Perhaps she won’t have to do a lot since I keep my face clean and acne-free.”

The moment I heard the first snip, I froze. Was this therapist cutting my face?! I could just imagine the blood that was coming out.

Some of the thoughts that were swirling around my mind were, “What is that snipping noise? Is she going to have to stitch my face after this? What is she even cutting at? Ouch, did she just poke me? Is this what it feels like to be tortured slowly?”

For years, I’ve had little white bumps under my eyes, so I thought that that must be what she was working on, but there seemed to be an excessive amount of cutting and poking that made this theory void.

Close to an hour later, I honestly didn’t know how much more I could take; my legs had started to shake! Thankfully, the therapist also noticed that I was fidgeting and said she was done poking me for this session but wanted me to come back for another facial in a month. FAT CHANCE!

For the grand finale, she again washed my face with soaps. They stung but were so quick I couldn’t complain about the pain. It wasn’t until she put what smelt and felt like acetone all over my face that I almost screamed!

By this point, I was praying that the facial would be ending momentarily. I couldn’t take it anymore! This was supposed to be painful, not excruciating!

When the therapist said she was finished and thanked me, I wanted to reply, “Thank you? What, do you enjoy inflicting pain on others?”

Before looking in the mirror, I tried to prepare myself for all the little red holes that were undoubtedly all over my face (I’m not sure if the therapist used scissors or really scarp tweezers). Nevertheless, nothing could brace me for what I saw! I looked as if I’d fallen into a wasps nest and had been stung all over my face! There were bright red bumps all over my beautiful face (I’m not vain, I promise)!

On the drive home, I could only imagine how my mom would react. I could just picture her mouth falling open in shock because that’s exactly how I was feeling!

As anticipated, my mom reacted as I suspected, getting straight on the phone to ask the therapist what she had done to her daughter! As my mom examined the damage, I started to laugh at the hilarity of it all before bursting into tears as the shock wore off! What had happened to my face? How long would I look like this? Will I ever be able to go out in public again?! 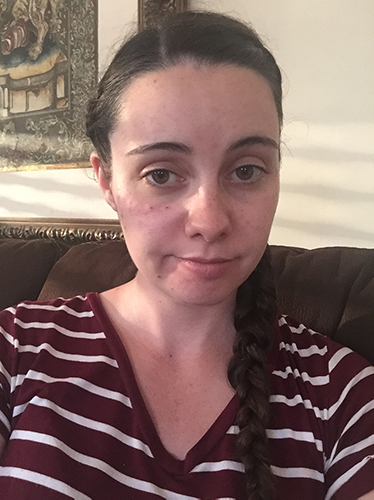 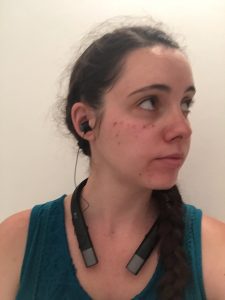 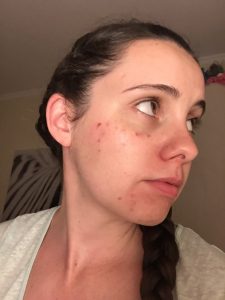 (It looked even worse in person!)

Each day, my face got better — thanks to lots of DoTERRA essential oils (Lavender and Purify), coconut oil, olive oil, and the new sensitive skin moisturizer I bought! I can now go out in public, again! 😛 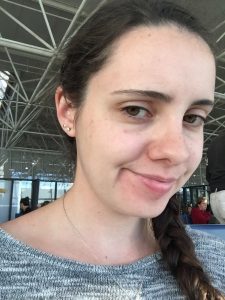 One week (Ignore my tired face, took this picture while traveling to Africa)

Word of Advice: Know exactly what kind of facial you’re paying for before inviting a stranger to inflict this kind of torture on your face! Though other beauticians have told me that what I went through was not normal, it’ll be a while before I willingly book another facial appointment.

Have you ever gotten a facial? What was your experience like? Hopefully, the complete opposite of mine! haha